Repeated attempts to call Rep Baron Hill were answered with the office closed / busy, message. So I had to write a “love letter” which follows. I also wrote to the Indiana Senators Bayh and Lugar to request opposition to the Obama Health-kill legislation.

I’m quite upset that your Washington and Jefferson phones are shut down during working hours. Could it be that you’re tired of hearing from the large number of constituents who oppose the Obama agenda?

I again urge opposition to HR 3200. It’s not what your constituents want. I also urge opposition to the Kennedy amendment to force me to participate in abortion (so long as a doctor fraudulently claims it’s an “emergency”. Any competent health care professional knows that there is NO need to cut up and kill a baby, rather than attempt a live/intact, early delivery in emergency cases. The former is actually more dangerous to the woman.) I urge opposition to forced tax payer funding of abortion, which is also written into HR 3200, with the understanding that we are already funding some abortions through the fraud permitted by the government. We do not need to fund any more.

I’m going to mosey over to the rapidly growing Independence Caucus to ask those nice people if they have another working office number to reach you.
Meanwhile, I recommend that you turn your Washington office phones back on. Frustrating your constituents is not a bright idea, and may cause you to have difficulty even running against domestic livestock in your primary next year.

Thank you for your attention.

Obama is on the cover for the 12th time in twelve months, that’s why. It’s overkill. Those of us who can’t stand Obama due to his immoral policies don’t want to see or hear him anymore. And even those who used to support him don’t want him in front of their eyes 24/7.

For Time Mag to be committing suicide for love of Obama is just fine by me. They’re too liberal anyway. But in the latest article, which I refuse to link, the view is put forth that Obama is over his head with respect to the health care bill.

Pharmer subscribes to the view that the Prez needs a permanent vacation.

Awright, this is just NASTY…… But being a rural dweller, it IS news. We always need to keep an eye on the barn for unexpected visitors.

Mr. Rodell Vereen was driven by love, it seems, for a second tryst with a horse named Sugar. Irresistibly sweet, I guess . 😛 This time the Conway, NC man was caught on kinko-cam by the owner of Lazy B Stables. So it appears that he’s in for some jail time.

For decades, I have said that racism should be a moot issue due to the ubiquitous mingling of the genes.

Very simply, EVERYONE is a MUTT, so the basis for racism is invalid. The basis for Obama’s election never existed at all. There’s no excuse for it.

has been noticed for his past, extremist ideas of forced abortion, and other means to remove human stain from the earth.

“Ecoscience, Population, Resources, Environment” is the 1977 text which Holdren coauthored with fellow nuts, Paul and Ann Erlich, in which the ideas to preserve the earth by removing a significant portion of the humans were put forth. Their plans included a Planetary regime of environmental control, forced abortion, forced sterilization of girls at puberty, and spiking the water or food staples with sterilizing chemicals.

This old text of Holdren’s, from which he now wishes to walk away, had suggested such severe measures of population control, in answer to the once popular, but now debunked doomsday predictions of ever increasing human hordes destroying the earth.

A discredited environmental nutjob has the ear of Obama, and his latest insanity is the global warming religion, which is established to be baseless.

So we have John Holdren in Obama’s right ear, and Ezekiel Emanuel in Obama’s left ear, ensuring that he remains as crazy as ever. We appear to have no elected leaders with the strength to respond to this problem.

Tells you why the request to “read the health care bill” is ridiculous!!!!

“I love these members, they get up and say, ‘Read the bill,’” said Conyers.

“What good is reading the bill if it’s a thousand pages and you don’t have two days and two lawyers to find out what it means after you read the bill?”

OK, so your Congress is up in Washington, flying BLIND, and they think that’s good enough for us.

Yes, Obama screwed up by accusing cops in the HOTbed of Liberalism, Cambridge Massachusetts of racism.

Before it’s Gone, watch the CNN video HERE, in which Officer Crowley gets the support of his peers and one of them specifically states that Obama has Lost Her Vote. 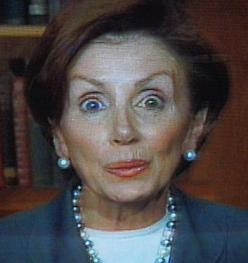 Dr McCaughey outlines the draconian cuts in the Obama health plan for the Elderly, who will bear the brunt of the supposed cost controls.