Here’s where You Should File a Complaint if you are suffering discrimination based upon your religious or conscientious beliefs. This includes ALL health care professionals who are being pressured to do things (such as killing, maiming, or fraud) which violate their conscience.

Tired of those bogus state and federal morning after pill mandates?

Tired of those State mandates that you have to tell women where to get an abortion?

Though Pharmer focuses on health care professions,  everyone else has First Amendment rights too.  The Trump administration is much friendlier to people of conscience, and is listening.

After about a decade at the helm of USA’s largest abortion mill and baby parts supplier, Cecile Richards is reported to be planning her exit strategy.  At age 60 she perhaps finds the pace of the various state and federal hearings, concerning her establishment’s Mengelian practice, to be exhausting.  Keeping morale up, while pushing her employees to score more abortions, is not an easy task.  The available SNRIs might not be powerful enough to allow her to keep up with the demands of her position.   Cecile has had to live through the years of Live Action Film coverage, along with the Daleiden Adventure, which exposed their procurement of baby parts for sale.  She has had to pretend to advocate for women who are sexually assaulted, while Planned Parenthood was covering up the abuse of so many women and girls who were having abortions.  Those kinds of gymnastics are grueling for a woman rocketing past middle age.

Your friendly Pharmer would like to encourage Cecile to make a total break, and avail herself of the counseling services at ATTWN, which assists those workers who desire to leave the abortion industry.  It’s never too late!

Today I got a little email, supposedly from Twitter. It’s to tell me about the horrible Russians manipulating their platform (to get Trump elected). Hilarious. Betcha every conservative who followed Donald Trump’s main account got this letter.

Right after Obama was elected, there was a cute email from David Axelrod:  Hello Pharmer, we’re watching you conservatives… This has the same kind of flavor. 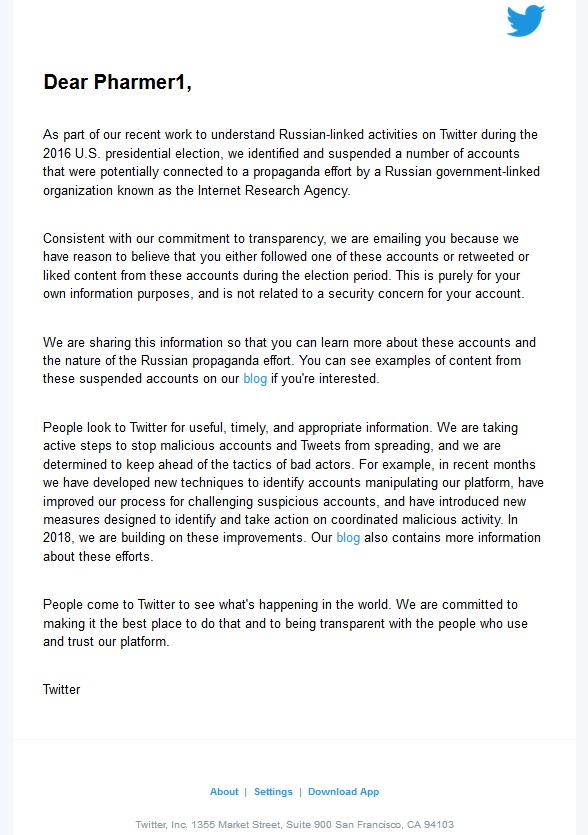 Ya, Twitter is a joke. When Trump is out of there, Twitter is finished in the USA.  Bet they hate that fact.

Josh Rogin of WaPo has weighed in on the hazards of the Kunlun Group out of China, taking over the International Gay Dating App, Grindr.

So anyone who isn’t totally out and proud about being gay, and about every single one of their intimate details shared on Grindr, might have a few extra worries.  Expect China to have a bit more influence to obtain personal data, and expect it to be used.

It could be that China just fished thousands of new agents out of the closet in the USA, and maybe even a richer haul from the Middle East.

Assuming that this soy boy is somewhat serious about his statements, and not just trolling….. If you see him in your neighborhood, put up the for sale sign fast, before he starts causing your property value to drop. He compares a two year old kid to a tree, with respect to the ability to communicate, and expresses agreement with the idea that it’s therefore OK to kill toddlers. The soy boy specimen was found and characterized at University of Tennesee, Knoxville by Students for Life of America. 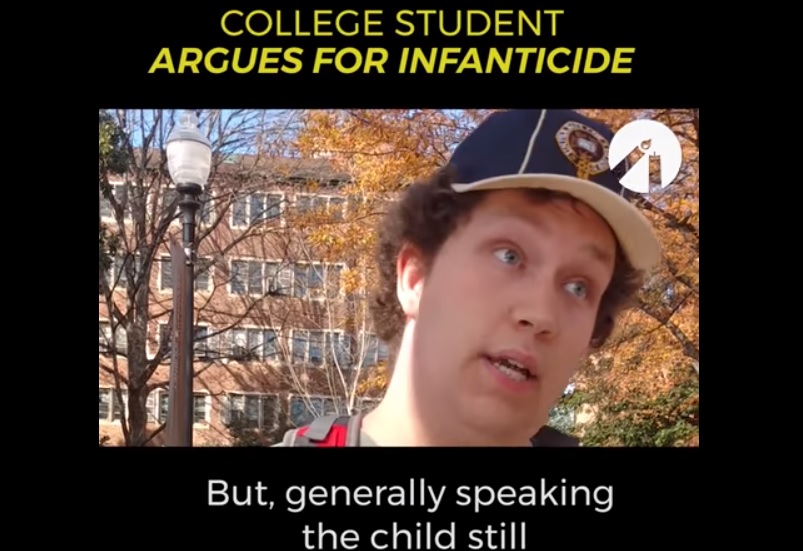