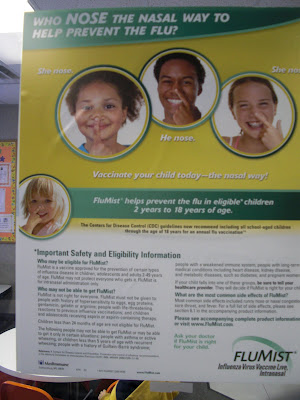 If you don’t want Flu, quit picking your nose!

A little birdie from the Republican Party, (this is Pharmer’s guess), paid Dede a visit, and asked her to surrender her bid for the 23rd District NY congressional seat.

This was to prevent one of their own Up East, Elite, selected left-moderates from suffering a crushing, public defeat by an actual conservative.

Were such a move not made, THE REPUBLICAN PARTY ELECTORATE WOULD HAVE GOTTEN THE MESSAGE TO REMOVE ALL THE RINOS IN 2010 SO THAT REAL CONSERVATIVES COULD GET THE JOB DONE!!!

Anyway, Dede’s gone, and Doug Hoffman is gonna take this one AWAAAAAAYYY.

A New York Post reader asks: Is there is time to get Obama on the cover Once more before the Pink Slips are distributed at the ever shrinking Time Inc.?

It appears that the Club Gitmo Prisoners are among the first groups to be offered the H1N1 vaccines.

Perhaps we’ll be hearing Tuskegee and Guantanamo in same sentence, from the liberals, 20 years from now……

That our military personnel are pelted with all manner of questionable vaccines is not news.

Dividing the cost of the stimulus package by the (inflated)number of jobs saved (160 billion divided by 1 million) yields a figure of 160 thousand dollars per job.

The White called that “calculator abuse”, not realizing that the rest of us don’t need a calculator to do simple math.

Could it be that the government is only saving the jobs of the “rich” so they can be taxed for health care?? 😉 😉

Those of us who know the limitations of after market surveillance understand this to be a conservative estimate.

Debi Vinnedge at COG for Life has uncovered another gross trivialization of human life.

Nocutis line of skin products, designed to maintain that Youthful appearance, have a protein complex component which is derived from cell culture originating from an aborted human fetus. No, the actual fetus is not in the products. A product derived from cell cultures with that origin IS in there. If that bothers you, avoid using the Nocutis brand.

You can track the source of this product yourself. Debi is always very thorough in tracking down the sources of cell lines used in vaccines and biotechnology. She searches and interprets the information provided by the actual producing corporations. After you look HERE, visit COG for Life and pass that information on.

Stupak got Obama on the phone, and determined that the plan which does not cover abortion is the non-existent Obama plan, a ghost which appears on the president’s teleprompter during speeches. The actual written plans being voted on in congress DO cover abortion and any amendments to remove this coverage have been stopped in committee.

If there is no cooperation concerning an amendment to remove abortion funding, Stupak intends to get 40 Dems to join with Republicans to defeat house rules changes that would have allowed the Dems to ‘rahm’ the health care through with less than 60 percent of votes which are usually needed to shut down opposing debate.

In other words, Rep. Stupak, D. Mich, will oppose Puglosi directly in order to stop the health care bill if abortion funding is not removed.

Arnold is misbehaving, and it’s got the liberals whining. One thing they can’t stand is a taste of their own medicine.