The National Institutes of Health is trialing a male birth control product on 420 test subjects.  This topical gel, containing both nesterone and testosterone  is designed to be applied to the shoulders and back, so that the individuals using this product had better not work too hard or sweat in the gym if they want any semblance of dose uniformity.  Dose adjustments for body mass are not addressed.  Nesterone, a progestin, is included to block testosterone production in the testes, so that sperm is no longer produced. This is then replaced by just enough testosterone so that the user is able to comply, in the event that sex is requested of him.  Whether he’ll remember how it’s done is anyone’s guess. One would  expect the effectiveness of this product to be largely dependent upon reducing the sex drive as well as fertility.  It’s expected to meet the same limp market as all of the previous male birth control drugs, but might become a go-to product in extended care facilities.

There should be a category on this blog called “Don’t Hold Your Breath”, for all the promised products, or events which will be a very long time coming.  Take for example the proposed rub on birth control, which is hoped to lower the sperm count to an  “infertile” level.   It’s a combo of a progestin, Nestorone, (segesterone acetate) , and testosterone, which is to be rubbed into the skin on a body part remote from the target organs.

You may read about it at this LINK, but don’t hold your breath waiting for guys to use it, if it ever comes to market.

Look at what LiveAction.Org dug up!!   The Smith College Library in Massachusetts has an old Planned Parenthood brochure from back when it was called the Birth Control Federation of America.  Follow that link to see the whole brochure for yourself.  Most interesting is the description of this item by a Smith College archivist.

Planned Parenthood hasn’t changed its mind about controlling certain populations.  Elitists such as Bill and Melinda Gates concur that Brown People should be told how many babies they can have.  Pharmer  begs to differ.

While this brochure admits that abortion is “killing a life that has already begun”, it obscures the fact that any non-barrier birth control has the potential to do the same thing, but usually earlier in development. This brochure probably predates the time when the embryocidal mechanisms of birth control were elucidated. 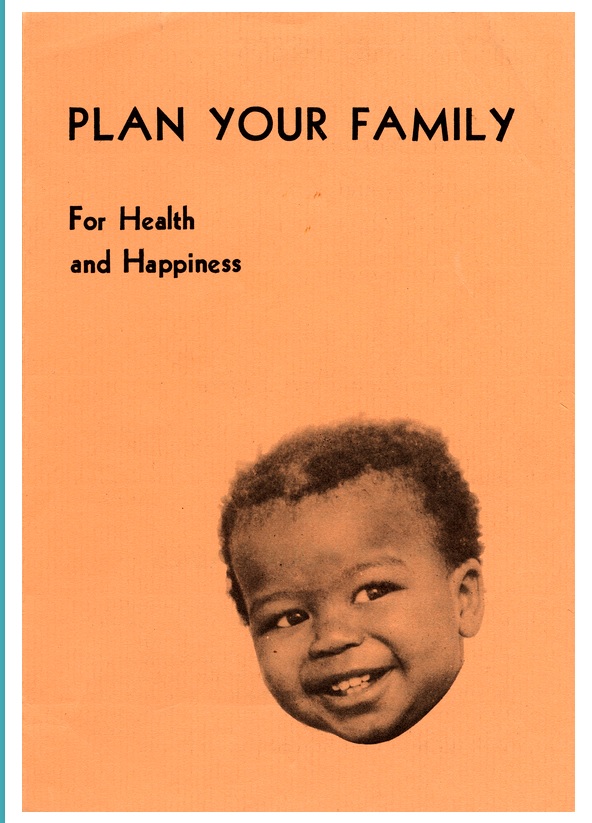 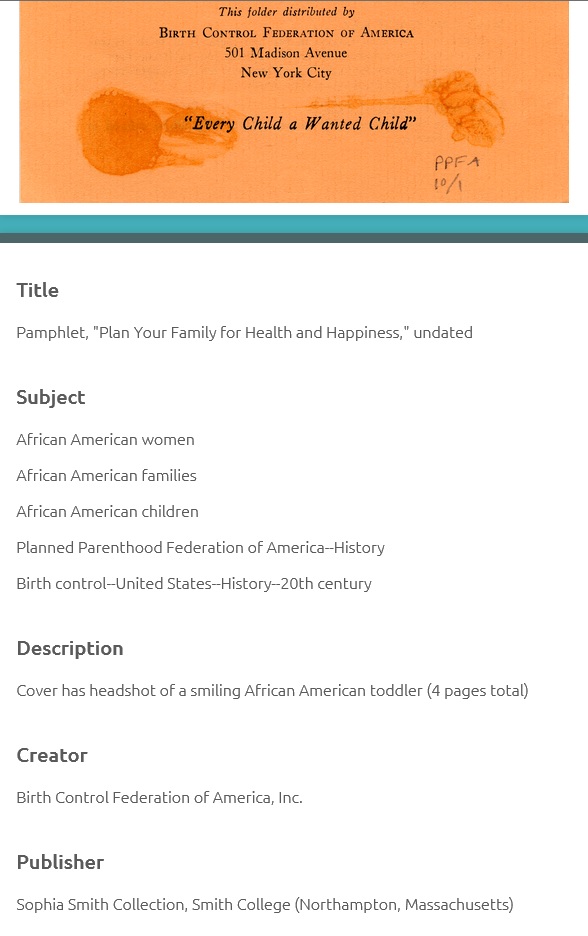 Washington State has been persecuting  Stormans, a family owned pharmacy business, whose employees oppose dispensing the morning after pill on the grounds that it can kill humans early in development.  The U.S. Supreme Court rejected a hearing of their case, leaving them with the option of complying with Washington’s coercive, totalitarian stance towards those who try to practice health care, or run a business in accordance with their consciences, or losing their livelihood.

Since 2011, when the research was published showing that Plan B doesn’t work for average sized American women (due to their size), more states have been trying to coerce the dispensing of this bogus drug. This underscores government incompetence in the field of health care. When Plan B does work, it can operate by post fertilization mechanisms – killing the early embryo, and killing is killing, ‘no matter how small’. Research shows that it doesn’t work to delay or stop ovulation during the women’s most fertile day of the cycle, (after the luteal peak). Yes, if you’re small enough for Plan B (levonorgestrel)  to work, it can be an embryo killer (abortive).

Silver lining: The supremes at least didn’t rule that pharmacists in all 50 states have to dispense Plan B, which could have happened with this nutty court.  The Stormans could close down and bring up a business elsewhere, if they haven’t already been drained of the financial means to do so, by the onerous, and unjust state.   Unfortunately the state of Illinois, as well as the  federal government are currently  attempting to legislate that pharmacists must practice incompetently with respect to the dispensing of birth control to patients.

Here’s a related commentary, as well as the research pinpointing why Plan B is such a huge fail in America.

Senate Bill 2960 has been introduced to the 114th Congress by Sen Cory Booker, (D) New Jersey, to force pharmacists to dispense all drugs and devices approved by the FDA to “prevent pregnancy”.   Many of these drugs work by multiple mechanisms, and a section of the bill forbids  informing patients of the possible abortive mechanisms, labeling this as deceptive.  Another section of the bill invites patients to sue the pharmacist who does not give them birth control.   Clinical reasons for refusing to dispense are supposedly allowed, but pharmacists will need to be prepared to  pay lawyers, court costs,  fines, and argue these reasons out in a courtroom.  A desire to avoid dispensing drugs which can act by abortive mechanisms, is not considered a valid reason for refusing to dispense birth control.

The morning after pills are addressed in this bill as drugs which must be dispensed, although they are ineffective in half of American women, who are too big for the dose to work, and poorly effective in additional portions of the female population. If they do stop pregnancy, this is more likely to be accomplished by mechanisms which occur after fertilization than beforehand.

Interestingly,  Sen. Booker’s bill seems to allow  that if a pharmacy does not stock any birth control in the normal course of business, it is not required to distribute the drugs.  Conversely, if your pharmacy has some birth control pills, you would be expected to dispense these AND the fairly useless, morning after pills.

Lawsuits will abound if this bill passes, as its medical and regulatory basis is very poor, its constitutional basis is absent, and it leaves pharmacists liable to legal repercussions, even if they adhere to the letter of the law.  Displaying  medical and legal incompetence along with Cory Booker are Senators Baldwin, Blumenthal, Boxer, Brown, Feinstein, Franken, Gillibrand, Hirono, Kaine, Markey, Menendez, Merkley, Murray, Sanders, Shaheen, Warren, Whitehouse, and Wyden.

Pharmacists, check out S. 2960, and see if you think it’s time to leave retail pharmacy to the robots.

The shock is that the New York Times would publish the fact that ISIS is using birth control and abortion to maintain their sex slaves in a rape-able state.  It seems that the cultural upsurge of anti-rape sentiment (particularly among younger people) has overcome even the left’s love of abortion!

Why does it take 100 years for leftists to admit what we knew all along?  Birth control and abortion have always been used to keep women as sex toys which are capable of maintaining a comfortable temperature and texture.  Through natural means, women could have much more effectively promoted themselves as valued member of society and advanced their own self determination.

History has been made.  The New York Times has admitted the obvious.

Both domestically and abroad, abortion and birth control have been used to keep women as a permanent underclass at best, and tortured sex slaves at worst.   ISIS has driven the point home in a way so graphic that the most hardened, cynical,  leftist media venue  is unable to ignore it.

The next step is for the the NYT to admit the main reason why the regime is importing all of those children without their parents.

(The New York TImes article, by Rukmini Callimachi, appears in print 3-13-16 in their New York Edition, as ISIS’ System of Rape Relies on Birth Control and is also found online.) 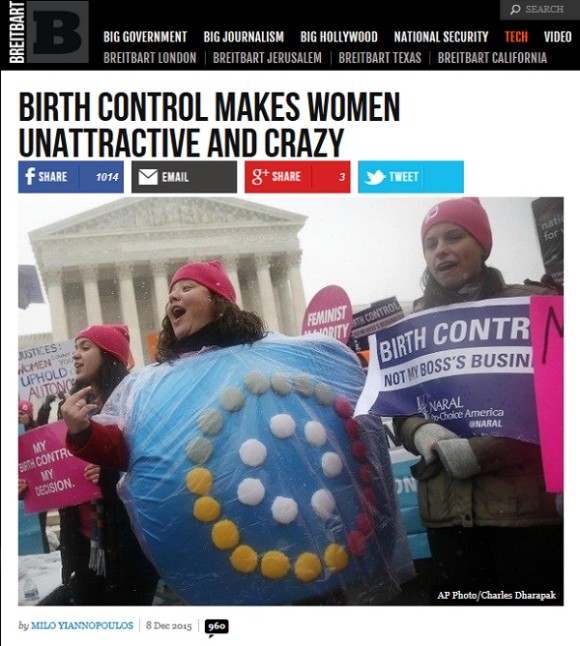 This is one of the more interesting points of view regarding the effects of birth control hormones on society.

The inconsistencies in Ben Carson’s pro-life views have been a fairly hot topic in the alternative news.  Surely leftists (including the republican establishment)  will use this to stick a fork into his candidacy.

The truth is that virtually all pro-life people have inconsistencies in their views.  We have grown up in a culture which has a very utilitarian view towards human life, so that becoming respectful of life requires a good deal of research, thought and energy.  Becoming more consistently pro-life is a process.  Ben Carson, a neurosurgeon, probably ignored reproductive medicine and developmental biology most of the time.

False claims touting the reliability of these modalities encouraged alterations in people’s sex behaviors, to the extent that they thought they could separate sex and reproduction. Societies have been bamboozled by a myriad of false medical claims,  Many of these affected mainstream medical practice in ways that would astonish you.  Recent retractions of prior medical dogma have changed the way hypertension is treated, and which dietary modifications are needed for weight loss or cardiovascular health.  Likewise, the birth control practices have been codified and entrenched based upon claims and assumptions which are simply not true.  None of the birth control methods and drugs work as well as touted in actual use.  Many, especially morning after pills, have become an under dose as the average size of women has grown larger.  To alter the dose would bring huge research and regulatory costs to the manufacturer.  It’s cheaper to bring a me-too or a generic drug  to market.

Chemical birth control has become an abortion selling scam, and a war on women conducted for profit.  People need to face the fact that reproductive activity causes babies.

Those who see human life as the most valuable thing will move further to the pro-life side as they do research and are forced to think about the issue harder.   Politicians should not necessarily be excoriated as they think out loud about being pro-life. Many politicians who claimed to be pro-life have not lived up to their promises.  We should be looking at the candidates who have not been bought out by special interests, and whose personal honor is linked to keeping their word.  If those kinds of candidates pledge specific pro-life actions, (such as de-funding abortion sellers, and protecting pro-life health care, religious and  business practice.) maybe they are the ones to support.  With that kind of help the grass roots pro-lifers could defeat the abortion disease.

Yes, this longstanding pro-life pharmacist, author and philanthropist, does it all.  In addition to his pharmacy practice, family life, writing, and a number of local and international charitable outreaches, he’s an ordained Catholic Deacon.

Pharmer sez: if you met Lloyd, you would never forget him, and is glad that her eldest offspring also had that opportunity before he headed off into healthcare.

Would you like to add health IQ points ???   Read Lloyd’s Remedies and his book on The Pill: America’s Sacred Cow, (no offense to bovines).