Benson High School, in Portland Oregon has suspended, and may fire a pro-life teacher, ostensibly for his opposition to Planned Parenthood.   Bill Diss, who has taught computer science and math in the public schools for 11 years, is known, and sometimes baited by the students due to his openly pro-life views.

The math teacher was escorted out of the school by police on March 19th, and is on paid leave, awaiting a possible firing.   This is thought to stem from his refusal, in September of last year, to allow two planned parenthood employees into his classroom, because they did not have proper ID.   They were supposedly there to teach an optional sex-ed class to the students.  Mr. Diss also organized a protest at a school board meeting against Planned Parenthood’s presence in the school district.  He says that he had  kept his protests against planned parenthood outside of work until they were invited into the school to teach.

Another issue of contention was the use of Mr. Diss’s name on permission  forms sent home to the parents of students, for planned parenthood’s teen outreach program.   His attorney contested the misuse of Diss’s name as though he endorsed the TOP program, and demanded a retraction of statements on the forms.  Since that time,  the school officials have been sending notes to Diss concerning his teaching practices, and requiring him to attend various hearings.   He has been told that his teaching contract will not be renewed.

Diss concludes that it “appears to be much more important for the school to have Planned Parenthood at Benson than it is to have a teacher teach computer science and math”. 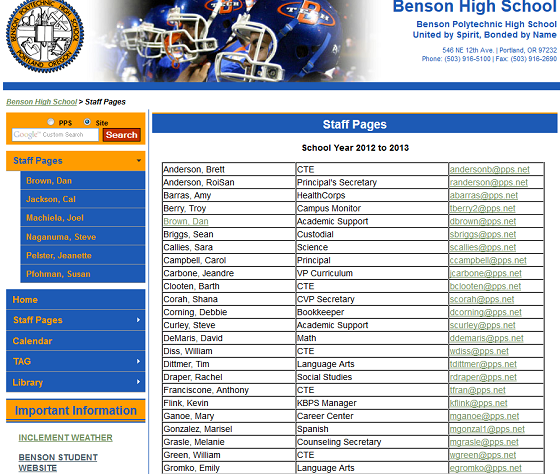 According to US NEws,  Benson Polytechnic  High School is not doing so well academically.

Now Benson H.S. is  down by one more math teacher. but who needs math when one can have planned parenthood’s version of show and tell?  Poly-Technique!

Alexander Tsarias is a self-taught programming specialist who wrote algorithms for the transformation of physiological magnetic resonance imaging (MRI) data into visual images.
Below is a video compilation of Tsarias’ project on human fetal development. Get to know your embryo and fetus here. Tsarias himself is a whole picture thinker, and is quite skilled at conveying his work to the layman. Listen up!

Want the book? Amazon has it.