The problem with America is that using the word ‘legitimate’ in the place of the word ‘violent’ is considered a more serious problem than, for example, infanticide. Most of the republican establishment would publicly state that Obama, who vigorously defended this practice in Illinois, is a ‘legitimate’ presidential choice.

Where did Akin get his politically incorrect idea that that pregnancy does not often ensue from violent rape? Politically incorrect pro-lifers noted that very few pregnancies from rape were reported, when compared with numbers of reported rape events, (back when rape was more associated with physical violence).

Those same pro-lifers surmised that the trauma of violent rape was not readily conducive to pregnancy.

Now our media is supplying us with theories that rape is motivated by sexual attraction (rather than violent intent) and that this happens when a woman is more fertile. Suddenly, rape has become a procreative mechanism, rather than unacceptable violence, in the minds of our political class. Promoting this theory is not going to help the conditions of women at all, but we’ve known for a long time that this isn’t in the game plan of our leftists.

To subscribe, as Akin did, to the former theory is considered more repugnant than defending and supporting the practice of killing babies after they are born, as Obama has done.

Incidentally, the star speaker at the democrat convention will be Bill Clinton, who has been accused of two rapes, several instances of unwanted sexual imposition, and lying to Congress and the American people concerning his habits. The state of Arkansas found Clinton’s ethical lapses sufficient to suspend his law license. On Dec 19, 1998 he was impeached.

The extreme ignorance and upside-down sense of proportion of the leftists, and their allies in the republican establishment, are ‘legitimate reasons’ for this country’s decline.

So far, Todd Akin has chosen not to pay attention to the republican wimps who threw him under the bus for uttering an incorrect word. They have never pursued democrats with such fervor, for much more serious errors or offenses.

Should he remain steadfast, an out of state contribution to his campaign is coming from the Pharmer, with the hope that other pro-life people will kick in to replace the lost support from his useless political party.

James O’Keefe and Project Veritas are at it again, showing that dead people and those assuming the identities of living voters can vote in Vermont. There’s no ID requirement to vote. This is contrasted with all the other activities such as buying an adult beverage, renting a hotel room, obtaining a marriage certificate, which require an ID.

The video below shows how easy it is to register Tim Tebow and Tom Brady in Missouri, and have them vote by absentee ballot.

You know what happens when the disasters are here in FLYOVER COUNTRY.
These survivors will be picking themselves up.
Ya, we heard the screaming sirens Down on the Pharm, and the storms passed on either side of us.
We’ve had our own little tornado before, which did a right angle around the Pharmhouse and tore up trees and flipped outbuildings. But that was NOTHING compared to the disasters linked above. The towns are trashed and people are dead.
Pharmer found the closest Catholic Church with a website to two of the most flattened areas, Henryville and Marysville, Indiana. You know your $$$$$$ won’t get wasted IF YOU SEND IT TO ST. MICHAELS. It’s connected to St. Francis Church which is ground zero of the Henryville disaster and they’re using the basement as a shelter.
AAA TORNADO DISASTER RELIEF link will stay on the sidebar.

* Update in Henrysville. Life on Sunday.

Senator Harry Reid has changed his mind, and decided to allow Sen. Roy Blunt’s Bill to repeal Obama’s birth control/abortive drugs/sterilization mandate to pass to the full Senate for a vote.
This new decision comes after Obamanator’s unilateral “compromise” to shift the administration of the mandate to insurance companies. This includes all the religious entities which are self insured. The compromise still steps on freedom of religion, still has religious organizations paying for things they consider sinful, and still forces people to sell and to buy things which they don’t want.

Here are two possible motivations: One is that Reid’s constituency includes a lot of self insured religious organizations, and they climbed down his throat.
Another is that Obama needs to bail on this very unconstitutional mandate, and Reid has been ordered to allow Congress to rescind it.

You might want to inform your Senators and Congressmen that you expect them to kill the abortive mandate of Obama/Sebelius. It is likely that most of the Dems realize that all their religious voter support will evaporate if they don’t vote for Sen. Blunt’s legislation. 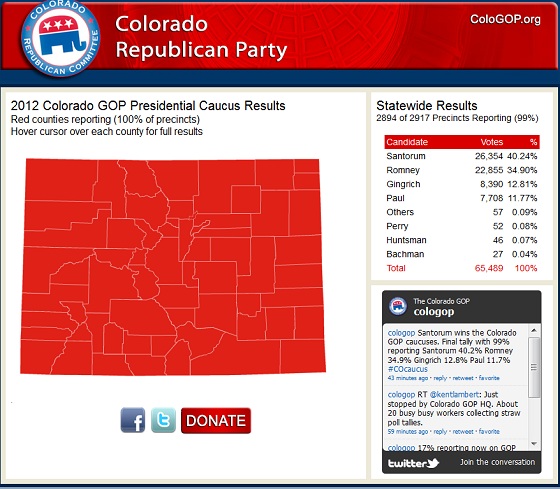 It’s so pretty, early this Weds AM. The map of Colorado has turned all red, meaning that all the precincts have reported. And the numbers on the side say Santorum, 40.24% and Romney 34.9 % and Gingrich 12.81%.

Expect the Missouri results, the Minnesota results and the Colorado results to be counted as insignificant by the media which needs Romney to go up against Obama and lose.

Two brothers admitted to doing things (valium overdose after prior intoxication, and choking) with a woman which caused her death, but are only charged with abandoning her corpse.

Check the link above to decide if the justice system in Blue Springs, MO renders that community too scary to visit. Maybe someone can make an app for road routes around that place.

A law which prevents pharmacists and pharmacies from being forced to stock or dispense the morning after pills has passed the Missouri State house of representatives.

One Canadian death panel decision has been averted with Baby Joseph’s transfer and treatment in a U.S. hospital.

It will remain to be seen if there is further help available to treat his neurological disorder, which has not been well characterized or explained in media reports.

Missouri State Rep.  David Sater has introduced a conscience protection bill for pharmacists, who opt not to sell abortive drugs.

It is of course, opposed by Planned Parenthood, whose assessment of which drugs are abortive changes depending on the audience.

This bill is to address problems pharmacists have faced in the past for refusing to dispense drugs which end human life at its earliest stages.

Heather Williams, an adherent Baptist was fired in 2006 by Target in Missouri for refusing to dispense the morning after pill, a drug which can stop the implantation of an early human embryo, thereby killing it.

Of course Obama will sue, saying that the government can force you to buy things.