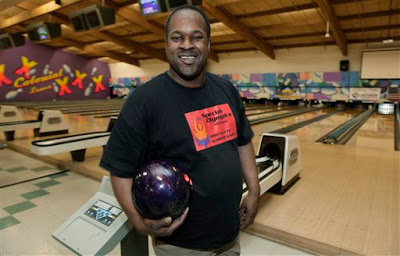 Affirming my previous comment about the athletes in the Special Olympics, Kolan McConiughey, their top bowler, states that he “can beat the president”. He’s bowled a good number of perfect games. (That means a 300 score, for you liberals). McConiughey advises the president to practice every day.

Yes— while the Leader of the Free World stumbles when not accompanied by the Teleprompter, the 81 year old Pontiff proceeds quite well without one, in multiple languages.

Witness the Pope’s reply, when asked if the Church’s approach to the AIDS problem in Africa is unrealistic:

“I would say the opposite. I think that the reality that is most effective, the most present and the strongest in the fight against AIDS, is precisely that of the Catholic Church, with its programs and its diversity. I think of the Sant’Egidio Community, which does so much visibly and invisibly in the fight against AIDS … and of all the sisters at the service of the sick.

“I would say that one cannot overcome this problem of AIDS only with money — which is important, but if there is no soul, no people who know how to use it, (money) doesn’t help.

“One cannot overcome the problem with the distribution of condoms. On the contrary, they increase the problem.

“The solution can only be a double one: first, a humanization of sexuality, that is, a spiritual human renewal that brings with it a new way of behaving with one another; second, a true friendship even and especially with those who suffer, and a willingness to make personal sacrifices and to be with the suffering. And these are factors that help and that result in real and visible progress.

“Therefore I would say this is our double strength — to renew the human being from the inside, to give him spiritual human strength for proper behavior regarding one’s own body and toward the other person, and the capacity to suffer with the suffering. … I think this is the proper response and the church is doing this, and so it offers a great and important contribution. I thank all those who are doing this.”

Ok, Barack, don’t try doing this without your teleprompter. You haven’t got a prayer.

Liberals, Listen up…….. because the Head of Harvard’s AIDS Prevention Research Project concurs with the Pope. (You see, the Pope watches the science.) Both Dr. Edward C Green, and Pope Benedict know that studies are NOT showing condom distribution to be causing a decrease in the spread of HIV. A paradoxical increase is seen instead, over the last 25 years of effort, and the cause is behavioral.

Dr Green:
“There is, a consistent association shown by our best studies, including the U.S.-funded ‘Demographic Health Surveys,’ between greater availability and use of condoms and higher (not lower) HIV-infection rates. This may be due in part to a phenomenon known as risk compensation, meaning that when one uses a risk-reduction ‘technology’ such as condoms, one often loses the benefit (reduction in risk) by ‘compensating’ or taking greater chances than one would take without the risk-reduction technology.”

That’s how Obama says he’s a bad bowler……… but I think the special olympics athletes are often quite accomplished. Get the guy away from his teleprompter, and it’s one public relations gaffe after another.

The conditions at Stafford hospital in Central England have been likened to the third world in an official report, from Britain’s health care watchdog. This has prompted an apology from Prime Minister Brown.

This is the model of medical care which Obama has in store for us. Knowing what it is like, in advance, before he subjects us to it, you can expect no apologies in the future.

There are between 400 and 1200 “extra deaths” reported has having occurred at the Stafford hospital over a three year period.

Do keep yourself updated on the progress of Rev Walter Hoye, who is being persecuted for protesting abortion.

Rev. Hoye is the Executive Elder at the Progressive Baptist Church in Berkeley and stands outside of the local abortion clinic with a friendly demeanor and easy-going signage: “Jesus [God] loves you and your baby. Let us help you.”

The Reverend has presented himself complete with video evidence of his peaceful demeanor and will, over time, provide an excellent test of the unconstitutional bubble laws in Oakland CA.

Members of both parties on capitol hill are participating in the scapegoating of AIG, in a totally bogus theater production. We’re being played for patsies.

AIG got the first round of bailout money from the Bush bailout, and a second round from the Obama Pack of Pork. Recall that AIG really is a laundry for processing the payments to multitudinous banks, since AIG underwrote a huge number of loans gone bad.

Written into the Obama Pack of Pork by Chris Dodd is permission for AIG to honor all its preexisting contracts. This includes all the bonuses which have been the subject of the current B.S. theater production.

Obama is claiming to not have known about this little detail of his Pork Package.

Remember that this bill had to be passed on Friday, an Ohio senator had to be flown into DC that night to vote for it, then Obama took a three day weekend before he signed it on Tuesday.

Obama’s teleprompter forgot about this, and told Obama to tell us that he was unaware of the AIG bonuses and the special permission written into the Pack of Pork for AIG to honor these preexisting contractual obligations ….. and that he is OUTRAGED!

This would be an argument for remembering to read a bill before signing it, but Obama doesn’t have the intellect to digest this stuff. We’ll see plenty more of the same charade.

Read this Washington Post article to see Dodd supposedly protesting the bonuses for which he had earlier written provisions.

Read about an Iowa senator, Charles Grassley (R) telling business executives (likely from profitable portions of AIG, who had fulfilled their contractual obligations) that they should commit suicide. He later explained that this was just rhetoric.

See Democrats proposing to tax or otherwise extort the bonuses from people who have earned them. Credit the tax cheat, Rep. Charles Rangel who has started this process.

See executives, in fear for their safety, after having been scapegoated by the government, give up their legally earned bonuses.

Dodd and Obama are the number one and number two recipients of AIG campaign fund payouts.

Obama is an incompetent, and disingenuous boob. Most of the members of our Congress are no better. We need to clean house in 2010. Join a TEA party today.

If you listen to this video, you’ll know it. Neither the supposed neurosurgeon, Sanjay Gupta (who turned down the Surgeon General job offered by Obama) nor Bill Clinton have a clue. They DON’T know what an EMBRYO IS!. Listen to Clinton saying that the embryos used for research AREN’T Fertilized ! DUH!!!! Gupta fails to correct him.

It doesn’t require genius diagnostic skill to determine that Caligula (Nancy’s new first name) Pelosi is completely nutz. That look in her eyes is only partially due to the fact that her face has been pulled tight and her eyelids can’t fully close.

That Pelosi thinks she’s the empress of America is apparent from her expectation that military aircraft be made available to shuttle her from Washington to San Francisco when she needs a little nutritional supplement of organic fruits and nuts.

The excesses of this same woman, who can castigate productive businessmen for their use of corporate jets, are legendary. Caligula Pelosi feels even more entitled than Al Gore, to her large carbon footprint.

Our new Democrats-gone-wild have insufficient conscience to feel embarrassment when their flagrant hypocrisy is publicly revealed.

Obama, however has such an extreme attachment to killing humans early in development, that he has overturned the Bush order to stop tax funding of creating and killing new humans for research. His psychotic need for vengeance against those who refuse to participate in his killing agenda has caused him to stop support for the research which works, and which does not destroy human life.

Follow THIS LINK to the action of obama, and look at the last line, which shows revocation of Bush’s executive support of ADULT stem cell research. This is the part you will not hear in the mainstream media. It should serve as additional evidence that you are wasting time if you rely on the television networks or the AP for coverage of the news.

The Father of the Canadian socialized health care system, Claude Castonguay, has after 30 years, admitted that it’s a failure. After years of sending their most critical cases to the United States to get timely treatment, his current prescription is to increase privatization.

For a single example, Ontario has sent at least 164 cases since 2006 to the U.S. for neurological cases needing emergency treatment, according to the above linked Investors Business Daily article.

There is a Canadian industry which lines up U.S. physicians to give timely care to Canadians who have enough money.

As European countries and Canada consider returning to privatized medicine, Obama is plotting to give US increased socialization, that is: Failure Care.

It would reduce social security payouts, however.