Montana district court Judge, Dorothy McCarter, has apparently legislated from the bench to make assisted suicide legal in her state.

The judge’s new law allows prescribing and obtaining medication for the purpose of suicide to be without legal penalty for those who are mentally competent and terminally ill.

This makes Montana the third state after Oregon and Washington to permit assisted suicide. 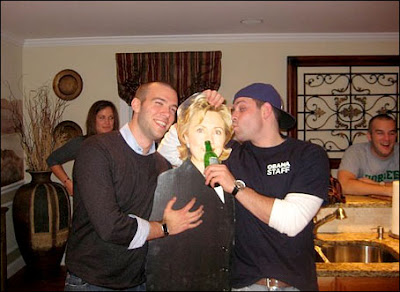 I hope the remaining Republicans are willing to sacrifice their voices for America. Saxby Chambliss (R- GA)won his bid for Senatorial office, and so the Dems don’t have their magic 60 percent required to completely ruin our lives.

This is a good thing. I might need to move to Georgia now, since 60 percent of those people are normal enough to realize that letting the Democrats totally run the U.S. would not be healthy.

Pharmer is watching the fun of these 17 lawsuits, filed mostly by democrats, concerning the citizenship of Obama. There’s a collection of evidence that the Obamanator is not a natural born citizen of the U.S., and is therefore unqualified to be President. Two lawsuits are pending consideration by the U.S. Supreme court. Look up docket’s here if that floats your boat.
In addition, Obama appears to be a bit outside the constitution with respect to nominating Hillary as Secretary of State. There’s a rule against nominating an elected official, during the term which they are elected to serve, to fill an appointment to office such as the Cabinet. This has been done by two prior Democrat presidents, I understand, but who’s watching?
HA.
and here’s a cool link to an analysis of Obama’s selective service registration. Seems that the form is waaaaay newer than his signature is supposed to be. Check it out! Way to go, Debbie Schlussel.

How about that? A nice short one packed with fun links to read. I must be getting lazy.