Here’s the press conference in which Trump told Russia that if they find Hillary’s missing emails, they will likely be rewarded by our press.   Watch the whole thing, and see one of the first examples in which a Republican candidate upstages the DNC convention, resulting in some amazing polling shifts.

Steven Colbert very crudely joined the throngs of Democrat controlled media figures who castigated Trump for his email comment, prior to the Late night show, and this is caught on video.

In order to put this issue in perspective………..

Watch the vid of Obama promising President Medvedev that he would be more FLEXIBLE after the 2012  election, then patting the Russian leader’s thigh.   Tell Vlad……

Obama is unable to disagree with Castro’s criticisms of the U.S., and he’s amassing great photo ops, such as pic in front of a Che image, and this one…….. a classic.

See the vid at Politico’s Vine

Obama and the social engineers have been working to pick up the pace of anchor baby production in recent years, while abortion rates overall have fallen a bit.  It is expected that they have probably reached, or even overshot the equilibrium that they might have been seeking.

Holly’s job made her heart sick, so she has blown the whistle on Stem Express, which paid Planned Parenthood for the opportunity to collect baby parts.  This second in a series reveals the disrespect this company had for the women who were getting abortions, as well as for the babies being killed.   Apparently some of the Stem Express employees were grabbing baby parts without obtaining consent from the moms.

Please pass this information on.   The mainstream media is burying it so effectively that most Americans have not heard that Planned Parenthood’s top business is abortion, and that it sells baby parts to collect up to 60 percent more income from each case of baby killing.

Harry Reid has announced that he won’t seek office again. Pharmer offers thanks and praise to God.

The Boston Herald Slams Obama for trading 5 high ranking Taliban prisoners for a soldier who has been charged with deserting his post, then throwing a big event in the Rose Garden to celebrate. 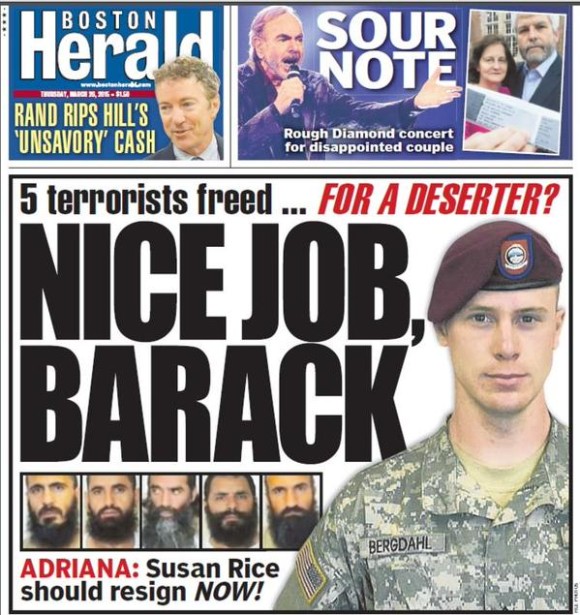 Out of nowhere pops a story from the Washington Post, averring that Reggie Love likes women.  With the above linked  story is a priceless pic of Reggie and Barrie on a date.

The claim is that, during the 2008 campaign, candidate Obama walked in on Reggie Love while he and a lady friend were in bed.  This claim comes from Reggie’s yet to be released memoir.   What’s the rush on this story?  Perhaps Joan River’s comments pricked a little too deeply.

According to the memoir, Obama later in the day referred to this event, saying “Well Reggie, it’s actually not a consolation to me that my campaign for president can help subsidize your love life.”

Reggie’s book is expected to be published by Simon and Schuster in February.

By now, many of those who have paid close attention to news of the protests in and about  Ferguson understand that they have been orchestrated in supposed response to a fictional narrative spun around a “gentle giant” Michael Brown.  From this base, leftists are trying to reenact the 60s and pretending to oppose the deteriorating race relations that they themselves  have brought about.

When confronted with available evidence, the grand jury  concluded that police officer Darren Wilson committed no crime, and refused to bring charges against him.  Despite this, he has resigned from the force.

A large proportion of protesters and rioters in Ferguson are rent-a-mobs, bussed in from elsewhere.  For example, 15 out of 16 members arrested from this leftie group of protesters was found to be from out of town says  KMOV.com. One of them was from Berkeley, CA.  CNN claimed that out of towners were inciting violence in Ferguson as early as last summer.

Most of the businesses damaged or destroyed on the first night of riots in Ferguson were minority owned.

Agents of Homeland Security have been nesting in and around Ferguson.  We were NOT supposed to be made aware of this fact,  as former employee, Mark Paffrath, discovered when he lost his job at the Drury Plaza Hotel in Chesterfield, MO, not 30 miles from Ferguson.  He reports seeing 70-plus Fed vehicles parked there, and had posted a photo and video of them online. Per Mr. Paffrath, a U.S. Navy veteran,  hotel management told him that his actions threatened a $115,000 contract that the hotel had with the Feds.

People are starting to tire of the lefties trying to reinvent and relive the civil rights movement.  More rational folks  find that protecting their own Ferguson neighborhood is more important than hosting a government backed riot.  Back in the 60s, Black people had good reasons to be protesting the unjust rule of mob, that caused extreme cases of abuse, and loss of life, as well as a routine environment of disrespect.   Now some of the new ‘civil rights’ charlatans, and low IQ media flunkies seem to be asking for the rule of mob to taint the legal process that protects our rights.

If Black Lives Matter, something will be done to fix THIS.

The news is even out in Taiwan!!   The Obama administration is seeking to buy ginormous amounts of cardstock to make 34 million  Green Cards.  Big Amnesty is coming, starting right after the elections.   Many new Democrats are being imported over the next 5 years.

Controversial and litigious Attorney General, Eric Holder, had bit of a health scare back in March of this year, and, as the story goes, he was treated for elevated heart rate.  He’s been talking for many months about resigning, and apparently now it’s official.   How long will Mr. Holder remain in office?  Obama has to find someone worse to replace him, so it might take awhile.

WND confirmed that Costco has made a decision to return copies of Dinesh D’Sousa’s book, ‘America: Imagine the World Without Her’ to the publishers.

Jerome Corsi adds that Costco’s cofounder, Jim Sinegal is a big leftie, who is a Democrat donor, spoke at the 2012 DNC convention, and has personally done well within the capitalist system that Obama abhors.

Businesses have a right to sell whatever products they like, and exclude other products.  Shoppers have a right to patronize businesses which exude a culture and sell products which are more in tune with their own views and lifestyle.  Your’s truly is  wondering if some of the family members  will be moving over to Sam’s Club on account of Costco’s repeated expressions of affinity for the leftists.  The decision to cease carrying  D’Sousa’s book might be the last straw.

UPDATE 7-10:  “Nevermind!”   Costco claims to have discontinued the book based upon sales, and claim to have reversed their decision based upon sales (and not vigorous outcry from their member-shoppers).  The company is  reordering D’Sousa’s book.