Segment from the Glen Beck Show explains the old IRS regulation from the Johnson era which impeded political speech in the churches in exchange for maintaining non profit status. This regulation has no teeth, and hundreds of clergymen are set to prove it again this year. Sept. 26 will mark the third annual PULPIT FREEDOM SUNDAY, says David Barton of Wallbuilders.

It would be pleasing to see the U.S. Catholic Bishops challenge this regulation also.

Apparently the members of the ACLU recognize Catholic health care to be of such high quality that they want their abortions done at Catholic hospitals, rather than those hole-in-the-wall Planned Unparenthood clinics.

Their latest push is to pressure the government to force the religious affliliated hospital personnel  to vacuum the babies out of their women.

Above is linked an article from the Becket Fund which is offering pro-bono legal help for any health care professionals who are  victimized by the ACLU’s push to force participation in this killing.

We know that the Rev. Al Sharpton makes income from stirring up racial discord, and he attempted it again at Beck’s big rally (half million people) in Washington this past weekend.

Mychal Massie, who heads up Project 21, has issued a challenge to Al Sharpton to debate “whether race is more important than equality of all men under the constitution and under God”. 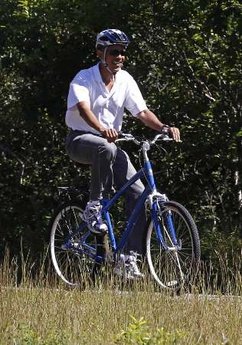 The most significant thing  is that

THE LEFTIE ELITISTS, WHO SUPPORT OBAMA,

DO NOT UNDERSTAND WHAT IS WRONG WITH THIS PICTURE !!!!!!! 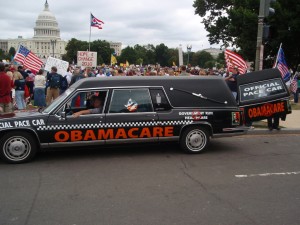 After a few news cycles over years,  and a barrage of commentary on  the poorly educated reporters who did not understand primary school level biology,  World News Tonight mentioned fertilization processes when discussing the (early) abortion  issues.   It took huge effort to evoke a  glimmer of comprehension about this crux of the abortion controversy.

Now these reporters are  fooling themselves into thinking that the conservatives have dropped social issues while taking up economic issues.

Wrong as usual.  This time they’ll stay wrong til it’s no longer relevant.    This connection is just too complex for the average alphabet network -journalist to understand.

When we take up the issue of Obamacare, we are addressing the abortion, euthanasia and embryonic stem cell  issues in a big way.   With Obamacare we are faced with health care professionals being coerced to participate in these practices, and massive loss of those workers as a result.  Surveys of physicians by Investors Business Daily,  and the New England Journal of Medicine have yielded the same result, predicting massive attrition in the event of Obamacare.   We are also faced with women being instructed to abort, and being  told that their children  will not have access to health care if they do not.   We are faced with the denial of care for the elderly and disabled in the name of cost containment.   The writings and vocalizations of Obama’s health care advisors are clear.

Repealing Obamacare IS THE BIGGEST SOCIAL ISSUE that has  grabbed  the attention of our  conservative movement.

Early on……. 76866 viewers on line at this time.  Obviously Hundreds of Thousands of people filling up the Washington Mall and surrounding areas.  The USTREAM cameras are panning this crowd and it is HUGE.

Unlike Obama pointing to himself as the uniter,  Beck is pointing to God as the source of salvation for America.

The  purpose of this party is to honor Service People and Real Americans.

Kicks right  off with Pledge of Allegiance and prayers.

Wired youth forget how to write in China and Japan.

This is the consequence of using pinyin and romaji transliterations of Chinese and Japanese written language on computers and phones, and also in the case of Japanese, using the hirigana syllabary in place of  the more complex kanji characters.

Both written languages have been greatly simplified from their original forms, though they are still extremely  laborious to memorize.

Cell phones can be both the source of the problem, and the means to look up the forgotten characters.   There also exist  optical character recognition programs in  phone apps which serve as aids in translating Kanji.

Obama has brought the Arizona copy of the U.S. federal immigration policy before the attention of the United Nations Human Rights Council.

Remember this is the same  UN which develops policies to make the kids available for sex, and abort their babies, (as well as culling the disabled from the human herd).

The cultural elite of the UN wouldn’t want those brown people  to have too much reproductive  success and get uppity, you know.

The big question is what moral authority do the UN freaks have regarding human rights issues?

Mother told to clean own room after caesarean – The Local.

Two days after a C section, the third time mom decided it was time to go home.

This is attributed to a labor shortage.  Most amusing are comments appended to the article from the natives who attribute this to a “conservative government” which is cutting back on spending.

“I don’t think you want me to waste my time to read every page of the health care bill. You know why? It’s statutory language,” Baucus said. “We hire experts.”

The purpose of creating bills with language that the writers cannot read is to be sure that most  Amerians cannot read them also.