AWR HAWKINS at Breitbart reports that Grenade components from a U.S. bombmaker who was allowed to continue funneling such items to Mexican drug cartels, were found at the scene of an explosion that killed three Mexican cops.

The DOJ refused to prosecute Jeane Baptiste Kingery when he was apprehended in 2009.  He was permitted to continue to ply his trade, with the claim that they would track his explosives as they were transported to Drug cartel members.

When the Lefties  tell you about how much they care for the children, remind yourself that this love and compassion often comes  to a screeching halt when they lose their tempers.

Professor David Guth is suspended at the University of Kansas for his response to the (Obama supporting) gunman who killed a douzen peole at the Navy Yard in Washington DC.

He tweeted:  “#Navyyartshooting  The Blood is on the hands of the #NRA. Next time, let it be YOUR sons and daughters. Shame on you. May God Damn you.”

What a delightful guy.  He was even able to embarrass a University with his vitriol.  David Guth, who stands by his tweet,  is the poster boy of academic tenure.

Next up is Allan Brauer, the current communications chairman of the Sacramento, CA Democrat party.  Check out what he had to say Amanda Carpenter, in response to her tweet exhorting Republicans to stop Obamacare.  Allan’s first luminous COMMUNICATION:  “@amandacarpenter May your children all die from debilitating, painful and incurable diseases.” Amanda Carpenter  retweeted his curse, saying that he “deserves some unfollows” from Twitter-ites.   You’ll have to click the above link to see Allan’s further replies, which describe infestations by cestodes  and pthiris species.   This Dem Communicator has perhaps been cruising the underbelly of the internet too long, and has REALLY forgotten how to behave in public.

Later, feeling a loss of popularity, Allan Brauer apologized for the death curse on Amanda Carpenter’s kids, but, as of this afternoon, no  such statement was forthcoming from the Sacramento Dems, nor California Democratic Party spokesman.

Aaron Alexis, the single suspect in Washington DC Navy Yard Shootings is said to have been under treatment at the Veterans Administration for severe mental problems, including paranoia, hearing voices, and inability to sleep.   The Navy did not declare him mentally unfit, since this would have rescinded his security clearance which had been obtained during earlier service in the Navy Reserves.  It appears that Alexis was attempting to self-treat his bad temper.

From CNN, it appears that earlier reports that an AR-15 was used in the shootings was wrong.  A shotgun and two handguns have been recovered from the scene.  The shotgun is believed to have been brought in by the shooter, and the handguns might have bben taken from guards at the Navy Yard.  It is suggested that Alexis had rented an AR-15, but returned it sometime prior to the rampage on Monday.

Thus far, the death toll attributed to Alexis is up to 12 Americans.

There of course is clamoring for more gun restrictions nationally, although this shooting occurred in a place with the most restrictive gun laws.

Two democrat senators,  the president of the Colorado State Senate, John Morse, and Angela Giron, from a heavily democrat district, have been recalled and replaced with republicans.

These successful recall elections were fueled by voter backlash against the ridiculous gun restrictions which these two, and other Democrats had touted, and pushed upon their electorate.

Dems are whining that the NRA spent money in Colorado, but leftist national funding sources (including NYC Mayor Bloomberg)  spent more on these elections, trying to bolster the two former senators.

Perhaps other politicians will take note that supporting such gun restrictions will cost them their political careers.

The media yawned at this news, and continually reported the losses of the airline wreck in San Francisco instead.  Incidentally, Chicago’s  weekend violence dwarfed those two crash  fatalities,  likely because of the construction and  safety  features of the Boeing 777.

Meanwhile,  there has been  a big rush for Illinois to pass concealed carry legislation today, to beat a federal court’s deadline to allow this practice in the state.  The lefties seek to retain significant restrictions, to hamper the ability to carry in public.

Judge Eric O’Briant has ordered dismissal of charges against Jared Marcum, the student who was arrested after wearing an NRA T-shirt to school.     The prosecutor agreed with defense attorney, that sticking Jared with a criminal record for failing to stop talking to a cop was excessive.

Jared had been suspended from Logan Middle School, in West Virginia,  for refusing a teachers demand to take off or turn his NRA T-shirt inside out.

See the story from April 18 HERE.

If Jared Marcum is any indicator, the regime is going to have trouble with the kids.  It seems that they’re not so easily cowed by the anti-gun educational regime.  Last week, Jared was suspended from Logan Middle School, Logan County, WV school and arrested after wearing an NRA T-shirt, with a “protect your rights” logo and a pic of a hunting rifle.  He wore it without incident until he was accosted by a teacher at lunch.  There was apparently a heated verbal argument when Jared refused a request  to remove the shirt or turn it inside out.   Cops were called and Jared was arrested for supposedly disrupting the educational process.

Jared has a court date in July to determine if he has to pay a 500 dollar fine or spend a year in prison.  His ordeal is just one of many suffered by conservative leaning students, who are being persecuted for their ideology by leftie public educators.  Jared is undaunted, however.  He returned to school this week wearing the exact same NRA shirt.  Other students in the county are doing the same as a show of support. They deserve our respect.

There is hope for America.

World Net Daily reports on a new textbook, “Pediatric Nursing: Caring for Children and Their Families, which advises nurses to discourage firearm ownership and support gun regulation.   This material is placed right at the beginning of the text, following the section on poverty and immigration.  Learn  a little bit about the author, Nicki Potts, HERE, and view info on the text HERE. 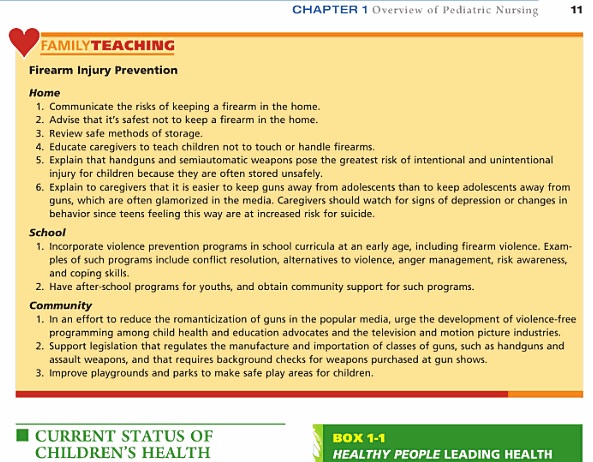 It’s interesting that gun crime in America is plummeting  as gun ownership is rising sharply   The media and the anti-gun nuts would not want you to be aware of either of these facts. 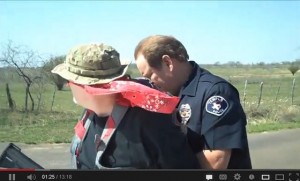 Officer Steve Ermis and his supervisor Sergeant Minnicks of the Temple Police Dept in TX, have really stepped in it.
They arrested Army Master Sgt. Christopher J. Grisham who was on a 10 mile hike with his 15 year old son, fulfilling an Eagle scout requirement.
Someone had reported “suspicious” armed people to the cops, and this caused Officer Ermis to disarm and arrest Sgt. Grisholm in the sight of his son, who was operating a camera. Readers can see a video of the entire event HERE.
The Blaze is carrying a more detailed account.
Seargeant Grisholm has had charges reduced from resisting arrest (because he didn’t) to a misdemeanor charge which essentially corresponds to talking too much while being arrested. His guns, which were not carried illegally nor unsafely, have not yet been returned to him.  Grisholm mentions that his  arrest was on March 16, 2013,  five “days after he urged the Temple City Council to declare that citizen rights to keep and bear arms will not be infringed“.
You know how much members of the military make, so check out Grisholm’s   legal fund HERE. to defend 2nd amendment rights,  to spank these keystone Temple cops for arresting him, taking his guns, and for detaining his son illegally for interrogation.

Is this for real?   The story is that a female student complained to administrators that she felt a threat to her life due to the awesome sound of this phone app.  Dan says the sound quality is pretty wimpy.   Pharmer has the i-Gun app, and yes……… the sound from  small phone speakers does not, in any way,  convey the true sound of gunfire.

UMA  Spokesperson, Linda Weldon, has assured everyone that UMA will not be commenting on this incident, which is good, because  nothing is going to help the reputation of this school, which advertises itself as military friendly, after the word gets out.

Enquiring minds want to know that if a student is traumatized by the sound of  a phone gun app,  what good will she be as a nurse?   How will she handle dementia patients, violent patients, or sex offenders in the various clinical settings??    Is she the preferred quality of student for UMA  to send into the Obamacare environment??

One of those commenting  at the Schnitt show was pondering whether the Ultimate Medical Academy should have accreditation with the Department of Veterans Affairs if they would  allow a military veteran to blow 40,000 dollars and get within three months of graduating, only to expel him for playing a phone app.

Dan has obtained some G.I. Bill  tuition assistance as a veterans’ benefit.  Do avail yourself of the Shnitt link to see that he is NOT  likely a waste of money.  Would this  suspension mean that UMA is burning your tax dollars???  A possible side story is that Dan might be experiencing backlash for objecting to  fellow students cheating, and copying teachers’ test materials.  Perhaps the Veterans administration would like to investigate UMA’s accreditation and use of G.I. Bill funds. 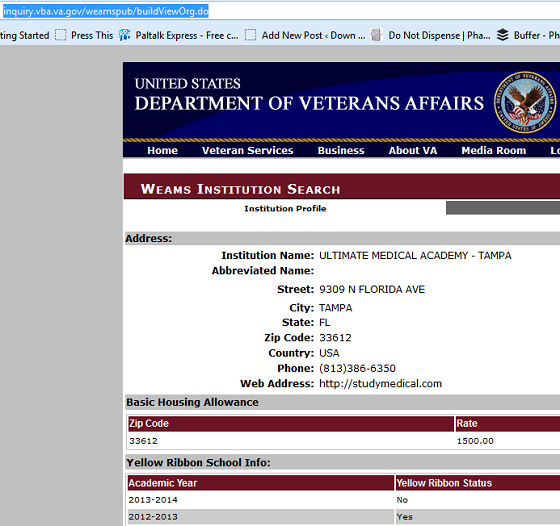