Imagine That: Voter-Fraud Allegation Against Hamilton County, Ohio Woman Who May Have Voted Six Times | NewsBusters.

Tom Blumer covers the case of Melowese Richardson, a paid  worker at the Madisonville Recreation Center polling facility in Cincinnati, who admits to voting twice in the November Election.  Her granddaughter, India Richardson, a first time voter, appears to have cast two ballots for good measure.  There is an additional clutch of absentee ballots coming from Melowese Richardson’s home address, with different voter names, all in similar handwriting.

Says Richardson:  “Absolutely. Absolutely, I’ll fight it for Mr. Obama and Mr. Obama’s right to sit as president of the United States.”

The Cincinnati Enquirer  (known as ‘Fish Wrap’ at the Whistleblower) covered this story, without mentioning the Richardsons’ names, though they are public record.

The Hamilton County Board of Elections will be issuing 28 subpoenas in connection with various falsified or fraudulent votes cast in the Nov 2012 election.

Romney Ryan Rally | Kings Liberty. <– This site covers the  huge Ryan Romney Rally held  north east of Cincinnati this week.   Pharmer heard that 50,000 or more people gathered in the cold to hear a whole array of  republican speakers.  You can get an idea of the size by clicking that link and seeing pics from the ground.

Go to KingsLiberty.com to learn more about the Obama/Sebelius HHS mandate, which forces people of many religions to violate their faith. Below is a video from this past weekend, showing local citizens of the Cincinnati area, standing against this violation of religious freedom and the 1st Amendment of the Constitution.

The Freedom Works Bootcamp in Cincinnati was well worth attending. Unlike Obama’s events, this one attracted much more interest than the planners had hoped for, and had to be moved to a bigger location at the Duke Convention center. The room, which holds 7000 people, was entirely packed with a hugely enthusiastic crowd. Matt Kibbe of Freedom Works pointed out that in contrast to the liberals, we conservatives did not have to be paid to come to the event.
Your friendly Pharmer took the whole family for ~ 7 hours well spent. None of the kids were bored, and now they have a better understanding of what their parents have been up to.

The people of Freedom Works and Glen Beck Rocked the House and energized a ginormous group of conservatives to get out the vote.

Lefties have a permanent problem, and it is U.S.

Freedom Works has a lot of good tools for tea partiers to keep in touch, as well as monitor their government,  and The Blaze is opening up interactive features of its news site to allow readers to take immediate action in response to news stories. Click those links!

Prayers for the family and close friends of Dr. Anant Bhati, who departed to the next life Friday night, 2/17/12.

Dr. Bhati was head of Gynecology at the biggest hospital in Cincinnati, on the board at the next biggest, Coroner of Hamilton County, and quite a bit more. He was one busy guy, hugely respected for his competency and his character. Pharmer has this to say about Dr. Bhati going to God early…… good for him, bad for us.

SBA List v. Driehaus: The lawsuit that led the ACLU to side with a pro-life group « Hot Air.

Sore Loser, Democrat Steve Driehaus, of Cincinnati Ohio is still pressing his lawsuit against the Susan B. Anthony List for running an ad against him for the 2010 election.

Yes, Obamacare funds and supports abortion, and we know this from the Dems refusal to allow amendments to remove it.  the SBA list ran campaign ads revealing that Driehaus, who claimed to be prolife, was supporting abortion by supporting Obamacare.

Finally the Protect Life Act has passed the new, Republican dominated Congress, which would eliminate Obamacare funding for abortion.  You can count on Obama to refuse to sign it.

Driehaus is using a false statement law in Ohio to sue the SBA list for the (correct) campaign ads, and his case will go to trial in Federal court.  The ACLU is actually siding with the SBA list on this case, knowing that such suppression of political speech would put them out of business.

An appeal of the original judgment in this lawsuit has been filed with the Sixth Circuit Court of Appeals.

Obama is grandstanding on the Brent Spence bridge, not very far from  Pharmer’s rural dwelling.  In fact, that’s the bridge Pharmer used to cross  on the way to her undergraduate educational institution.  The Brent Spence is in reasonable shape,  does not need reconstruction, but does need another bridge next to it, because it’s a traffic bottleneck over the Ohio River.   Obama’s  second try at selling the “shovel” ready jobs is meant to supply immediate gratification.  This won’t be applicable to the Cincinnati area, where Obama is appearing.

So, it’s all symbolism and no substance.  Cincinnati will not be seeing bridgework from this funding package of Obama.   It’s more likely that the EPA will forbid building of further bridges between Cincinnat and Northern Kentucky, out of intense concern for the catfish (big as sharks), sauger and longnose gar of the Ohio river. 😉

Pharmer was also amused to see mention, in the LA Times, that Reid had no time for Obama’s jobs bill, and that it would not get attention until later in the fall at the earliest.   Read fast, this article is going to disappear:

“But there is some possible good news for President Obama: The $447-billion jobs bill that he wanted passed “right now” back in early September is stuck in a legislative traffic jam in the Senate.”

News flash…… it’s a tax and spend bill that has to start out in the Congress, according to the Constitution,  and Obama’s “bill” has NOT BEEN INTRODUCED THERE yet.

Islamophobia in the US, April 30, 2011: Bullying Targets Muslim and Arab Students in New Jersey Schools.

The above linked news page addresses  Muslim relations in the U.S., and the  issue that some innocent people are paying a social price for the actions of other controversial or terrorist groups.

A few articles down on the page…… Mother of Mercy H.S. in Cincinnati makes the news for it’s reach-out to CAIR, a controversial group ( favored by only 11 percent of U.S. Muslims,) which has been under Justice Dept scrutiny for  financial ties to known terrorist groups.

Mother of Mercy High school has upset their student’s parents by hosting a Ramadan event with CAIR, an interfaith Iftar dinner.  Here’s their link……  which may not be up for long.

Pharmer (who is generally respectful of religious sensibilities) notes that the parents were asked to bring a dish to share, but not to make sure that it’s Halal,  (e.g. PORK free). 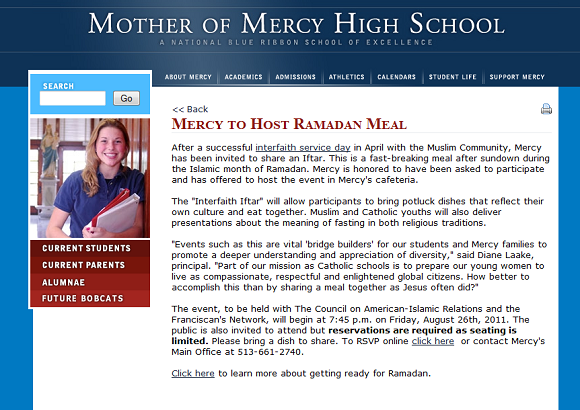 The parents’  difficulty stems from the ties which CAIR has with terrorist groups, the recognition of this by the FBI and the Justice department, revocation of non-profit status by the IRS for failing to disclose its funding sources, etcetera.  This dinner is not the first collaboration of Mother of Mercy High School with CAIR.

The school secretary was unaware of CAIR’s “extracurricular activities”, and  referred media to the school principal, Diane Laake, who did not return phone calls.

It’s not a feel good time for Mother of Mercy HS, which is on the West side of Cincinnati, which is Steve Chabot country.

Pharmer has had related  difficulties with  her kids’ Catholic elementary school, sending kids  to  work with groups which promote things antithetical to the religion of the students.

(It’s  safer for the kids to be picking berries on a Washington farm.) 😉

There are NO difficulties here with the school hosting an interfaith event.   Surely a Muslim group which is not overtly tied to the funding of terrorism could have been found to collaborate on such a thing.

Pharmer congratulates the students parents who have brought public attention to this matter.

Notes:
If  they were done with THIS, they’d change their name.

What happened when CAIR sued Anti-CAIR ? CAIR did not seem eager to go through the discovery process.  The suit was dismissed.

Poll:  American Muslims DON’T CARE for CAIR – so it should  not be so hard for Mother of Mercy HS to find  less controversial pals.

The UK Telegraph sent one of their own into middle America for an inside peek at the Tea Party movement, and what you get is one of the most accurate views of what’s going on.

Seeing ourselves as others see us.