Landau uses lethal injection to kill the baby on day 1, (the counselor describes intracranial injection),  does an ultrasound  examination on day 2 to make sure injection worked, then induces labor for delivery of the dead baby on the third day.

Landau has a hotel toilet abortion protocol for those women who begin to deliver too early in the induction process.  If they start to deliver in the hotel room, they are to sit on the potty  and dial the abortion clinic personnel.  The women are specifically instructed not to dial 911 because that might interrupt the process and change the outcome, particularly if the baby happened to be born alive.

Click to hear for yourself the information which Live Action’s pregnant investigator received about the abortion procedure at Landau’s clinic. 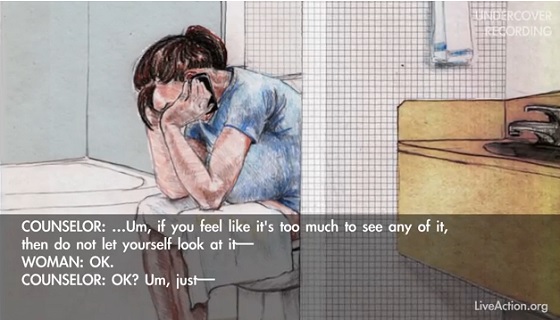 Some theories are available from a local videographer in Houston.

It seems that Mayor Annise Parker’s girlfriend, Kathy Hubbard,  is the Campaign Finance Director  for Planned Parenthood of Houston and SE Texas Action Fund Inc. PAC.  That could have something to do with it.

The Houston constables open the gates of Planned Parenthood every morning, and the police dept has understandably  not been enthusiastic to begin investigating the reports of murders (babies killed after birth) at Douglas Karpen’s clinic.

Check out Youtube for a relevent video  with more details.

Texas state senator, Wendy Davis, has volunteered to be the poster girl of late term abortion by attempting to filibuster a bill which would limit abortion to 20 weeks, and also put in place some regulations regarding hospital admitting privileges for abortionists. Leftists feared that this would have forced closure of dozens of abortion clinics, so they mounted a vigorous and disorderly protest, which turned out to be what eventually killed the passage of this bill. The vote results are said to have been delayed just past midnight, thereby setting things back to ground zero for the SB-5, TX bill prohibiting late term abortion.

Update: Governor Perry has brought SB-5, back to life by calling another special legislative session, saying that “too much important work remains undone for the people of Texas”. Business resumes on July 1.

Update: The regime added Obama’s support for Davis during with a tweet at #standwithwendy : “Something special is happening in Austin tonight”.

Leftists are cursing Governor Perry for adding another special session to finish the business which the pro-abortion mob shouted down during the couple hours of 6/25.  Check out more of  Wendy Davis’s classy  twitter backup crew here, and here.

Second in the Live Action Series of films on Sex Selection Abortion features the Margaret Sanger Center, Planned Parenthood’s late term abortion clinic in Manhattan, NY.
The employee, Randi Coun, in this video recommends chorionic villus sampling to determine the sex of the child. She reiterates that planned unparenthood aborts for any reason, including sex selection.

It seems that the work of Live Action has inspired others to dig up the bones at Planned Parenthood.

According to this 2008  story, and police reports,  Planned Parenthood held a 14 year old girl, who had been made pregnant by an adult male, in their custody over the objections of the girl’s father, and a police officer.

The Planned Parenthood employee,Andrea Smasne, stated that once a girl is pregnant, she is emancipated, and claimed that the father of this 14 year old statutory rape victim had no right to take his daughter home.

The police officer was advised by Kennewick  city Atty, Eric Eisinger  that planned parenthood was interfering with parental custodial rights, (Custodial interference section 26.28).  The officer  proceeded to use this information to extract the girl from the clinic and send her home with her father.

Also learn about the many pro-life groups in Washington state, attempting to stem the cultural decay of that state.

This idea of a planned parenthood clinic holding a 14 year old, and attempting to send her with a statutory rapist to another clinic for a late term (22 week) abortion got Pharmer to thinking….   what would MUSLIMS think of this abrogation of family structure and order?  Would they like to join the various Christian sects in vociferously protesting this obamanation?

It’s the anniversary weekend of Roe V Wade, the March for Life is Monday, and the media really has its hooks into Kermit Gosnell.

They’re wringing their hands over the deaths and mutilations of his female patients, and wondering how the state failed in its oversight of the action for 30 years.

Meanwhile it’s party time for Obama, who’s thrilled as can be that Roe V Wade usurped the states rights to regulate and prohibit abortion.

Obama’s schedule for the week of Jan 23rd does not include an address of the pro-lifers when they’re in town.