On the First night of the Democrat National Convention,  Planned Parenthood is throwing a Sex Politics and Cocktails Party for a special list of invited guests (Bill Clinton and Sandra Fluke??) and endorsed candidates.    (Free birth control provided??).   Sooooo classy.   It will be held at the exclusive Privilege Day Club and Night Club.   Get ‘er DONE between 9:30pm Sept 4 and 2:00 am Sept 5.

Planned Parenthood of Southwest Ohio is throwing a big awards Gala in Cincinnati Ohio at the Kingsgate Mariott Conference Center, right before election day.   The particulars are below.   Got $175 for a ticket?   😛    Could be that Planned Parenthood is in better shape than their top political cronies.  The dems are giving away tickets to Obama’s speech at  the national convention, but Planned Parenthood can still charge some big bucks for admission to their parties. 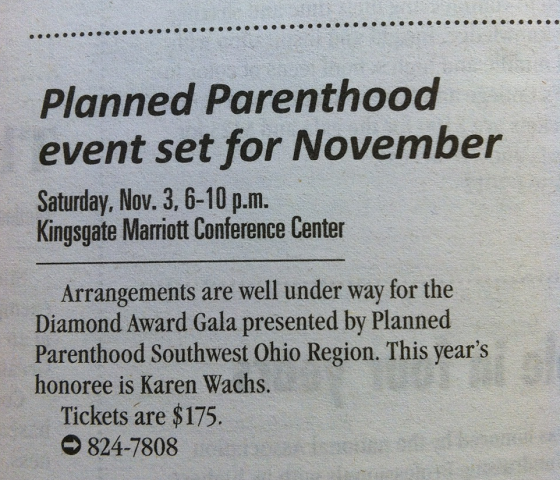