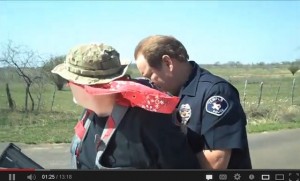 Officer Steve Ermis and his supervisor Sergeant Minnicks of the Temple Police Dept in TX, have really stepped in it.
They arrested Army Master Sgt. Christopher J. Grisham who was on a 10 mile hike with his 15 year old son, fulfilling an Eagle scout requirement.
Someone had reported “suspicious” armed people to the cops, and this caused Officer Ermis to disarm and arrest Sgt. Grisholm in the sight of his son, who was operating a camera. Readers can see a video of the entire event HERE.
The Blaze is carrying a more detailed account.
Seargeant Grisholm has had charges reduced from resisting arrest (because he didn’t) to a misdemeanor charge which essentially corresponds to talking too much while being arrested. His guns, which were not carried illegally nor unsafely, have not yet been returned to him.  Grisholm mentions that his  arrest was on March 16, 2013,  five “days after he urged the Temple City Council to declare that citizen rights to keep and bear arms will not be infringed“.
You know how much members of the military make, so check out Grisholm’s   legal fund HERE. to defend 2nd amendment rights,  to spank these keystone Temple cops for arresting him, taking his guns, and for detaining his son illegally for interrogation.

Dr. Suzanna Hupp lost her parents in the Luby massacre in Texas in 1991, and has been a concealed carry advocate ever since.  She unfortunately had not been carrying on the fateful day she was in the restaurant with her parents.   The video below (a classic!) is her original testimony before Congress  a couple of years after the event.    Go HERE to see a C-span video of her more recent testimony this past Monday.

Eddie Ray Routh is being held as the prime suspect in the shooting death of famed Navy Seal Sniper, Chris Kyle, and one other veteran, Chad Littlefield,  at a charity event held at Rough Creek Lodge Shooting Range in Texas.  The two victims were killed at point blank at about 3:30, and the suspect, said to have fled in Kyle’s truck, was apprehended hours later in Lancaster, TX.  Routh is said to have been a marine, with the media providing his impetus for the shooting as post traumatic stress disorder.

Chris Kyle served with Navy Seal Team 3, completing  four tours of duty in Iraq, for which he was awarded numerous military honors.  He is regarded as the U.S. Military’s most prolific sniper. Since leaving the military, he headed a private firm, Craft International, which provided private security and  sniper instruction for law enforcement and military.  A co-founder of FITCO Cares Foundation, Kyle was involved in numerous charities and spent much of his spare time assisting disabled veterans.

After surviving two previous shootings, and six IED explosions, Chris Kyle met his untimely death at age 39, at the hands of a fellow service veteran.   He leaves behind his wife and two children.

Readers who want to understand the mind and career of Chris Kyle can check out his recently released best selling book, American Sniper.

Democrats everywhere appear to be acknowledging that their party is distinctly dissociated from Bible teaching.

That’s the only reason why Kay Hill would be denied the right to vote at Taylor City Hall in Williamson County, Texas. She wore  a T shirt proclaiming  ‘VOTE THE BIBLE’ to the polling place.  Officials there told her that she would have to cover the shirt in order to vote, since it was considered electioneering.

Note that, Democrats.  “Vote the Bible” now distinctly means Don’t Vote Democrat, due to the changes in that party’s platform and ideology.

Kay Hill covered her shirt and fortunately was able to vote.  She’ll be pursuing this further with the TX Secretary of State’s office. Perhaps we’ll learn how many more times the Democrat party will admit that Vote the Bible means Don’t Vote Democrat.

Michelle Obama tells us to vote early because something could come up on election day, for example your “toilet overflowing”.

Michelle: Vote Early Because Your Toilet May Be Overflowing on Election Day | CNSNews.com.

Apparently our government thinks we should vote often, since it contests the state voter ID laws, with Texas being just one example.

It also is tearing down billboards which admonish people to obey existing election laws.

Oddly, the only early voting that the Obama administration seems to oppose is that of the military, which needs this opportunity the most.

Mary Gonzales used to be just a regular old lesbian, but now this former Texas State Rep advertizes as “Pansexual”. That means any warm body will do, doesn’t matter what sex it is, or what sexual identity it assumes at the moment, or how much surgical alteration has occurred. Gonzales will take ’em all.

Pharmer guesses that it’s kind of like having beer goggles on….. all day long! Every morning after is a surprise!

Ted Cruz, a Tea Party candidate who has never held political office, beat Lt. Governor David Dewhurst, in a primary runoff election for the  senate seat in Texas.  This is quite an costly  upset for the OLD Republicans, and another sign of surging Tea Party strength.     This second runoff resulted because David Dewhurst was unable to garner 50 percent of the vote in the regular primary.

Dad Accused of Beating Daughter's 'Molester' to Death Is No Hero | The Stir.

A Shiner, Texas father is the talk of the country for beating to death a man who was sexually assaulting his four year old daughter.

At the Stir, they’re generating hits by discussing what this man should have done, after the fact.

Given the available information, Pharmer would judge the father as neither a hero nor criminal. Paternal instincts took over, and he beat the man whom he observed assaulting his daughter. The ‘pedophile’ died of his injuries.
The Dad has to live with having seen a horrible thing done to his daughter, and with taking the ‘molester’s’ life during the act of stopping the assault.
(Incidentally, if this man had shot the molester once with a gun and killed him, there would not be the endless discussion of how many times he should have been allowed to hit the perp.)
Fortunately Texas law is reasonable with respect to self defense, and is not likely to add further misery to this family’s life.

Updates: The girl’s age has been corrected to five years. More details on the incident are HERE. Further evidence affirms that the girl was being raped.

News that the father will not be tried for murder is HERE, and remarkably the media is restraining itself from identifying the father and daughter in the case, or trying to turn it into a race war.

Seventeen year old Diane Tran, who appears not to need to attend classes to keep her grades up, was sentenced to jail and fined for repeated truancy, by Montgomery Republican judge Lanny Moriarity. She is said to be working two jobs, and helping to support siblings, after her parents divorced suddenly and apparently bailed out on the kids.
Likely no one knows the whole story of this family.

Lanny Moriarity ran in 2010 unopposed in his district in Montgomery County. Yes he is a Republican. The Teaparty could send a primary challenger to make his life interesting in the next election cycle.

Moriarity is, at best, a lazy judge. He apparently encountered Diane Tran’s case more than once (a prior warning is mentioned) and did not investigate the cause of her truancy for 2 minutes. Much more time had to have been spent on the paperwork than consideration of the case.

This kind of use of the legal system leads very motivated and talented young people to develop disrespect and hatred of authority and government.

On Monday U.S. District Judge Lee Yeakel  ordered  a Texas  to resume paying planned parenthood while the challenge to its law defunding abortion providers is being considered in federal court.   The Fifth Circuit Court of Appeals promptly stayed Yeakel’s order, and the policy will resume.  This cuts $17 million in funding to Planned Parenthood, while the  case is being decided.