First of Warrenroche’s 18 video series, just like being there.

End of Tea Party in the video below.  LOOK down at the grass !! It’s clean. Almost ZERO sign of the huge crowd.

Look at the way the Obama supporters left the mall after his coronation! 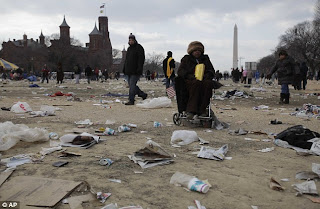 photo from Associated Press
There is a fundamental difference between Obama’s supporters and those who oppose him.