Your friendly Pharmer been cheering for James Damore since hearing of his dissent at Google, and have high hopes for his future success.  He seems independent enough to run his own business.

As you probably have heard, Google booted Mr. Damore, because it is forbidden to believe and profess that men and women are different.   Google has become a garbage propaganda machine both on the inside and the outside.  People can adapt to this fact with their keyboards and touch screens.  When looking for real information, Duck Duck Go is a better choice.

Carol Moynihan at Mercatornet has combined the news of Damore with a report on  some interesting employment studies that are worth your attention.

Most curious in her article is the mention that when women enter a field in large numbers, the salary has tended to plummet.   In the U.S., this has occurred in the field of pharmacy, and the salary drop is huge.  Another contributing factor could be the proliferation of pharmacy schools.  However, nursing schools are also proliferating, men are entering the field in large numbers, but those salaries are not dropping.

Companies need to adjust pay for the real biological fact that child bearing and rearing still is women’s work.  While guys can and do help with the latter, there simply won’t be enough transsexualism  to change the former.  Women take six weeks and upwards off of work to have a baby.  This means that it costs more to hire women of reproductive age, if the salary is kept equal.

In the U.S., the millennials are beginning to  rebel against being told politically correct things that obviously conflict with what they observe.   This is an absolutely wonderful trend, to be encouraged at every opportunity.

The Gateway Pundit folks  found this gem:  Reuters chopped off the last 4 days of their rolling poll of likely voters because it shows Hillary tanking.  See a screenshot from the Pundit first.   The second pic shows the Reuters chop job on their image.  It’s worse than  what this blogger does in a hurry with any kind of cheap image editing accessory.  You think they would have more pride since they get paid to do that work. No link to that second pic, since they’ll probably tear it down shortly. 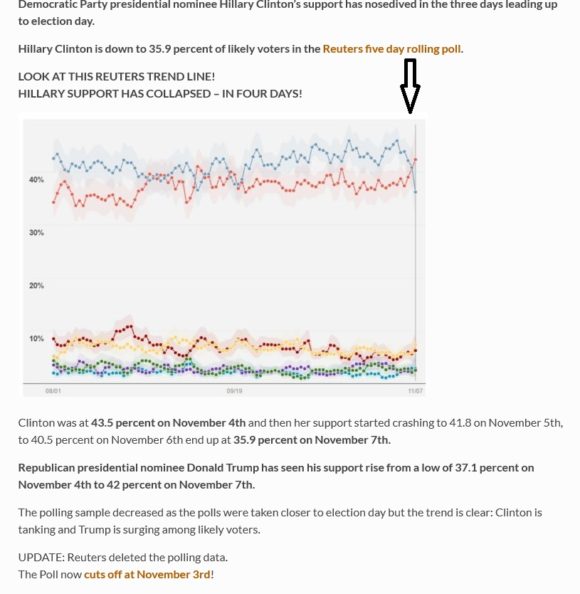 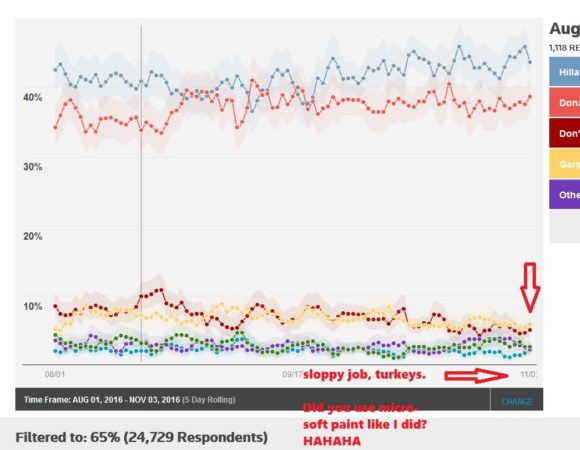 That didn’t take long…. China has suspended Apple’s music vid and iBooks. How about that!! Can you guess why? Leftists take heed. China has a strong central government which censors what its people sees. And it doesn’t like the social agenda of the West and what it’s pushing, 24/7. Apple is completely mum about this because we’d all be wondering why they hate the religious freedom states here so much, but put up with China completely suppressing their “rainbow” content. Many of our other multi-national companies are behaving the same way. Western Christians are so much easier to cow than the Chinese, Russians and the Muslims.

The LA Times reported on this event, but naturally had NO CLUE as to what would cause China to shut down most of Apples content service.

One more time, lefties.  This is what’s going to happen when you build that utopia of your dreams, with the government controlling everything.  There will be a decision that your habits bring about extreme financial burdens, and then………. POOF!

Who would want to fund a young person’s education at Oxford University after hearing that their publishing arm has banned all mention of pigs and pork in future publications. A directive sent out from the publisher to authors directed them to avoid the mention of “Pigs plus sausages or anything else which could be perceived as pork”.

Numerous media outlets in the UK, as well as Muslim MP Khalid Mahmood have called the ban ‘absolute utter nonsense’.  Mahmood noted “when people go too far, that brings the whole discussion into disrepute.”

In other words, cowardly leftists of the Oxford University Press, one cannot even debate whether or not pork should be eaten if one cannot say the words “pig”, “pork”, “ham” or “bacon”.  That’s only one reason why such politically correct claptrap should be met with boycotts and cancelling of alumni donations to Oxford.

Muslims everywhere are likely laughing at the Oxford University crazies.  People contemplating further education should seriously reconsider any thoughts of accepting  injections of stupidity and cowardice at Oxford.

Child abusers at the American Academy of Pediatrics are touting the IUD (indwelling coathanger) as the most effective form of birth control.   Yep……. PEDIATRICS.  And in  light of this, remember that the medical records of  12 year olds in New York State can be held as private from the parents, and that there is no enforceable age of consent in the state of Washington.That’s one more salvo from the lefties in their never ending effort to groom girls as sex toys.

In another corner is Camille  Paglia, offering another of her controversial opinions that will surely bunch up the panties of feminists on campus and off.  Camille is the odd liberal who recognizes that there are certain evils that government and institutions can’t fix with their thought control.  In her latest opinion piece, she reminds the girls that the need to be vigilant and practice self defense will never go away.  The campus thought police will never be able to eradicate the evil propensities of sexual predators, says Camille, while once more reminding her readers that men and women are inherently different.

WND confirmed that Costco has made a decision to return copies of Dinesh D’Sousa’s book, ‘America: Imagine the World Without Her’ to the publishers.

Jerome Corsi adds that Costco’s cofounder, Jim Sinegal is a big leftie, who is a Democrat donor, spoke at the 2012 DNC convention, and has personally done well within the capitalist system that Obama abhors.

Businesses have a right to sell whatever products they like, and exclude other products.  Shoppers have a right to patronize businesses which exude a culture and sell products which are more in tune with their own views and lifestyle.  Your’s truly is  wondering if some of the family members  will be moving over to Sam’s Club on account of Costco’s repeated expressions of affinity for the leftists.  The decision to cease carrying  D’Sousa’s book might be the last straw.

UPDATE 7-10:  “Nevermind!”   Costco claims to have discontinued the book based upon sales, and claim to have reversed their decision based upon sales (and not vigorous outcry from their member-shoppers).  The company is  reordering D’Sousa’s book.

Bryce Asberg, the 15 year old founder of Students for Life at Wilson High School, has fought an uphill battle with school officials who are trying to suppress his group’s efforts. The latest affront is censorship of their pro-life flyers, with the claim that they express a potentially offensive agenda. (Click HERE to judge the content of the flyiers for yourself.) Wilson Students for Life has had enough.

Wilson High School, Tacoma Washington is now dealing with a challenge to their censorship of pro-life speech and writing, and the extra work that comes justifying such policies to American citizens who are accustomed to freedom of speech.

The point man for censorship activity against the Students for Life group at Wilson HS is Vice Principal Shane Sliva and he can be contacted at (253-571-6076) or e-mail (ssliva@tacoma.k12.wa.us). Ask him to cease and desist in his efforts to suppress the speech and activities of the pro-life student group.

The monetary cost was just too high for A&E to persist in its leftist intolerance, so with a hypocritical sermon to the rest of us about “unity, tolerance and acceptance”, the network agreed that Phil Robertson would remain on the Duck Dynasty Series.

After A&E tried to boot out a man who practices all three of their supposed values better than they do, they’re now telling us how to live, and what to think.  Objection to specific activities is entirely different from the intolerance that the leftists practice, in trying to destroy the lives of everyone who has opposing opinions and practices. Ask the bakers and the photographers who have lost their livelihoods because they opposed the practice of gay marriage on religious grounds, or health care professionals who have lost their jobs for opposing abortion.  Less famous people than Phil are routinely being squashed by leftist intolerance.

A&E has no values which they hold as more important than money. They fear losing that more than anything, and this was clearly demonstrated for all to see. The same can be said for Cracker Barrel.  The question for the future is whether you want to support organizations which will throw you and your kind overboard at the first possible opportunity.  It is possible for you to obtain Duck Dynasty episodes without having cable television.  Buy the series alone from Amazon and stream it through a Roku box.  You might be paying for cable only to watch a very few shows.  Cut the cable and use the internet.  As for Cracker Barrel….. that company appears to be past its prime, now that people understand the nature of its management.

Please consider redirecting your funds away from those who seek to silence you, or remove you from society altogether. 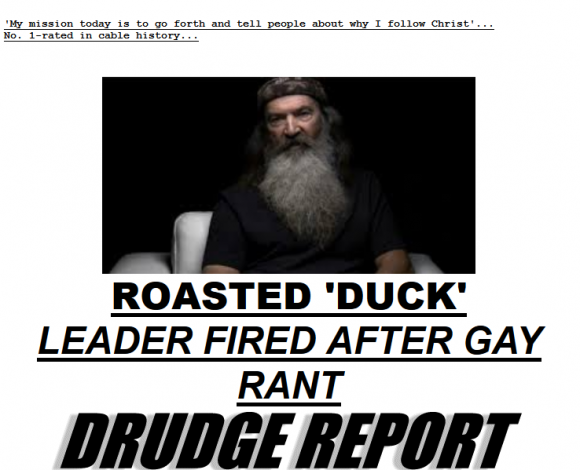 A&E execs are the losers, that’s for sure. Pharmer thinks their self destruction has been pre-ordained. If it had not been touched off by the G Q interview of Phil’s it would have been his next, or the one after that. He’s going to let A&E do themselves in.
Pharmer would like to congratulate Phil Robertson for getting it done. He has probably been tired of A&E’s management of the show, and the general encroachment of the show on the rest of his time. By this time, Phil and his family could do the kind of shows that they want, better and more efficiently than A&E. The Robertson family is made up of smarter people than the A&E execs, as exemplified by their painting that network into a totally LOSING situation.
After Duck Dynasty, A&E will shrink to nothing, (look at the rest of their programming to see why), and Duck Commander will forge on, bigger than ever.
Incidentally, not all of the gay people are needing or wanting the kind of “defense” that comes from A&E, or the nuts from GLAAD. Plenty of them realize that killing free speech of those who don’t agree with homosexual acts, can eventually lead to their own loss of personal freedom. Social trends and fashions are always in a state of flux. The First Amendment is a good thing for everybody.
Gay adult siding with Phil’s free speech rights. 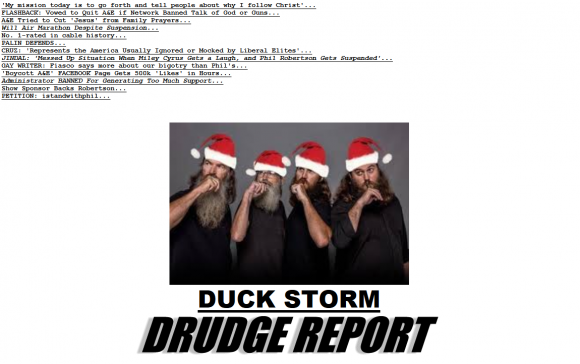 Keeping up:
A statement from the Robertson Family regarding the controversy. They can’t imagine filming Duck Dynasty without Phil.
Future Options for Duck Commander Family
Brandon Ambrosino asks why the opposition has to be dismissed rather than engaged.
Truthrevolt coverage ……
and petition
Stand with Phil on Twitter
Facebook Support Page for Phil
Gay adult siding with Phil’s free speech rights.